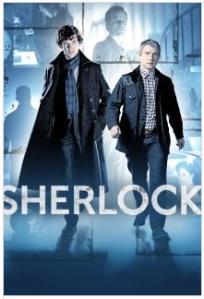 Well, what can I say that hasn’t already been said?  This show is brilliant.  It’s got a modern-edgy feel to it, but it’s not so edgy as to immediately turn you off.  [Note from the future: by the end of season 3, the editing and effects become unnecessarily flashy.  They struck a nice balance in season 1–no need to get too “cute”.]

Each episode is a blend of elements from different cases, and it is interesting to see how they use them.  There are all kinds of clever twists on the little details of Doyle’s works.  For example, Watson walks into the room when Holmes is deep in thought and looks at Holmes’ arm, which is full of nicotine patches; Holmes muses, “this is a three patch problem.”

At the university lab with an important pair of high-tops.

I love the way they film Holmes’ deductive (technically, abductive) method.  Usually we see Holmes hop around and stare at things and then stand up and give Watson and Lestrade a little speech detailing all that he’s just observed.  In Sherlock, when Holmes notices something, small captions or words pop up next to the item in question, sometimes a running list appears, so that we can actually follow Holmes through his thought-process.  He still gets up and gives his speech, but it is nifty to see what he’s thinking in real time.

The music is sharp and witty.  It sets the tone for the show and really fits both the main characters and the cinematographic style.  Like pretty much all BBC productions, the sets, costuming, over-all production quality are excellent.

The sitting room at 221b Baker Street.

Now to the acting.  I love Benedict Cumberbatch as Holmes.  He captures the restless energy that one can imagine a younger Holmes would have had.  He’s erudite and well dressed, amusingly arrogant and sharp, but still shows that he cares for both Watson and Mrs. Hudson.  Not much else to say I suppose, he’s just a pleasure to watch. 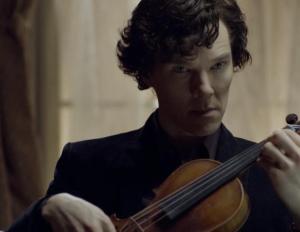 Martin Freeman is exceptional in Sherlock.  He plays Watson with eagerness, subtlety, and heart, and expresses Watson’s occasional frustration with Holmes without over-doing it.  At the end of “The Reichenbach Fall”, when he is at Holmes’ grave he speaks to it, believing that his friend is dead.  Freeman’s delivery is so moving that I got all teary-eyed watching him.

Sherlock‘s Watson picks up on a few things that are gaps in Doyle’s character–at least to modern sensibilities (and granted, these stories were not character studies).  For example, Watson meets Holmes when he’s just come back from war in Afghanistan.  But Doyle’s Watson doesn’t seem particularly affected.  It seems like all he came out of the war with was his service revolver (and a wound, the location of which changed).  The un-affected, stiff-upper lip thing was, speaking very generally, the Victorian attitude towards soldiering.  In Sherlock, though, when Watson comes back from Afghanistan (wow, over 100 years later and we’re there again…never get involved in a land war in Asia, I suppose), his often traumatizing experiences during the war inform his point of view and his actions.

Mycroft is a snappy dresser.

Sherlock‘s adaptations of the other characters are fairly good across the board.  Mycroft is pretty straight forward but is well cast and done with class.  Mrs. Hudson is just ok, she nags a bit and seems rather lost at times.  Lestrade is the modern version of the less than imaginative, by the book detective.  He seems more “together” than Doyle’s Lestrade, which I think makes sense–the original Lestrade wouldn’t last long as a Detective Inspector in today’s Scotland Yard.

Sherlock’s Moriarty is so…much…fun!  One of the best, sharpest, craziest Moriartys/villains ever.  When Moriarty monologues he chews the scenery, spits it out, and picks his teeth.  Totally excellent.

I know some traditionalists aren’t on-board with this “reboot”, and I suppose I get that.  However, we already have Jeremy Brett’s extensive Holmes collection, so why try to do another period piece Holmes?  It would be superfluous.  Sir Arthur’s characters are so iconic, though, and there’s definitely some more to be done with them–just do it well.

Which is where Elementary (2012) fails.*  Given how popular Sherlock is over on this side of the pond, I was surprised that CBS decided, right now, to do their own modern adaptation (ok, maybe I shouldn’t have been).

I felt bemused as I watched it.  Like so many American adaptations, it goes too far, too over the top.  Johnny Lee Miller’s in-your-face-dysfunctional, un-shaven, rehabbing Holmes is so far from the original that they really shouldn’t have bothered.  The slacker-savant thing is boring and doesn’t make sense in this context–would this Holmes really be accepted by the police as a consulting detective?  Doyle’s Holmes was creative and non-conformist yes, but he had a certain sense of propriety and professionalism.

Moreover, a female Watson doesn’t make a whole lot of sense–but I was willing to give it a try.  Lucy Liu’s Watson, though, seems to loathe Holmes!  Again, so far from the original–Watson isn’t forced into a partnership with Holmes.  Watson is genuinely fascinated and appreciative of Holmes and his work.  The whole dynamic is off, so again I ask: why bother?  The team of Miller and Liu don’t have the “friendship-chemistry” that Cumberbatch and Freeman have–a chemistry that is kind of, you know, central to the story.

Watson is helping, not scowling.

*I admit that I quit watching Elementary half-way through the second episode because it was too irritating–so my analysis may be off.  I don’t know how/if the show has progressed, and I really don’t care.  I’ve got season 3 of Sherlock to look forward too.

The Bottom Line: Wonderfully catchy and clever.  Had me hooked within the first 2 minutes!

And so ends this year’s Great Sherlock Endeavor!  I had fun re-watching some things I hadn’t seen in awhile and I hope you enjoyed reading about them.  Join me May of next year to celebrate Sir Arthur’s birthday by continuing to explore adaptations of his beloved stories.