When I used to live in the Metro D.C. area, I would go to Wolf Trap’s yearly Louisiana Swamp Romp–a summer afternoon of blues and zydeco.  It’s a lot of fun, and I highly recommend it, despite the fact that Wolf Trap is an open-air venue and therefore you’re subject to Virginia’s sweltering summer heat.  The Swamp Romp is great for both music listening and people watching.

The lawn at Wolf Trap.

For example, there are the people who get there early and sit out on the lawn with their picnic blankets and coolers for hours on end–those are some dedicated beer drinkers out there.  Also, there’s one middle-aged couple who show up every year in full Mardi Gras kit–Saints’ jerseys, colorful hats, and tons of beads.  They also carry umbrellas decorated with tinsel, glitter, and feathers, which they use to lead parades of happy people dancing and giving out beads all around the venue–good times!

The year I saw Tab Benoit at the Swamp Romp he was supposed to play a set somewhere in the middle of the show, but was running late (through no fault of his own).  “Don’t worry y’all,” our very enthusiastic MC announced in his southern drawl, “Tab Benoit is on his way!”  He then proceeded to update us in-between sets.

“Tab Benoit…just called me on his cell phone and told me he’s on I-95!”

And finally, “Tab Benoit…is in the house!”

Benoit, his bassist, and his drummer ended up closing the show–and boy were they worth the wait!  Benoit is one of the best blues guitarists of his generation.  He’s got good musical instincts–his guitar work always has structure and rhythm, with a raw, energetic blues sound–often delivered with a cutting edge.  For the slower songs, he can tone it down without losing his momentum.  His vocal style matches that of his guitar–solid blues-rock with a bite, hitting all the right notes. Consequently, even with a limited ensemble, Benoit managed to fill up a sizable open air venue like Wolf Trap with a rich Louisiana blues sound. 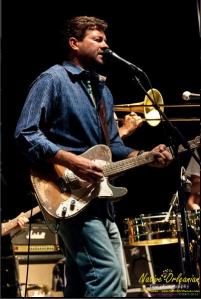 Benoit’s solo riffs, which are so key for a live show, are like entire songs themselves–they aren’t just a jumble of notes and scales, the guitarist desperately strumming the same high-pitched note, trying to pass it off as talent.   (Ok, maybe I was a bit too passive-aggressive just there in my criticism of contemporary guitarists, but the point stands.)  Even when listening to a recording of his shows, you can hear how well Benoit reads the crowd and responds in kind with dynamic and soulful riffs.

I’m recommending two albums here, Night Train to Nashville (2008) and Swampland Jam: Live (1999) as I tend to listen to these two back to back because together they have a lot of my favorite tracks.  Night Train to Nashville starts off, coincidentally enough, with “Night Train”, which is a road trip song if I ever heard one (though despite the title, it doesn’t work so well when traveling via the Amtrak Quiet Car.)  Another absolute classic is “Too Many Dirty Dishes”, which makes me smile every time I hear it.  For a change of pace, try singing along to melodic tracks like “Moon Coming Over the Hill” and “Solid Simple Things”.

Benoit’s extensive album catalog has yet to disappoint me, but if you get a chance to see him live, I highly recommend that you jump on it.  This guy’s a touring machine, though he doesn’t get up north too often.  Check his site:  TabBenoit.com