Ah, so Billy Zane is the hero then, right?  Anyone?

Rarely, in my many years of watching b-movies, have I come across a *masterpiece* quite like this.  My sister and I found it in the $3.99 bin at the local supermarket, and it was worth every penny–however, there’s not nearly enough Billy Zane in it.  Not by a long shot.  (The above, poorly Photo-shopped picture from the DVD menu…yeah, we never see Billy Zane doing anything but sitting in a throne room. False advertising!)

Billy Zane is not pleased.

The plot is fairly non-existent, but seems to be along the lines of: evil King Laypach conquers the land and exiles a group of people.  These people have a warrior, Draden, who fights back, but is eventually caught and beheaded–but not before vowing revenge in a lengthy monologue.  As he dies, he passes on his soul/energy/power/whatever to a seemingly random peasant boy watching the execution.

From there the “plot” gets pretty fragmented.  The movie cuts to 8 years later, and the random boy has grown up and is named Magnus, and suddenly he knows that he’s royalty (?).  With this knowledge, and nothing else, Magnus sets off to Promethea to do…something.  Meanwhile, his brother is tossed in prison and the movie proceeds to spend an inordinate amount of time with the brother as he talks to another prisoner.  Just talks.  Doesn’t contribute to the plot at all (but it is unintentionally hilarious). 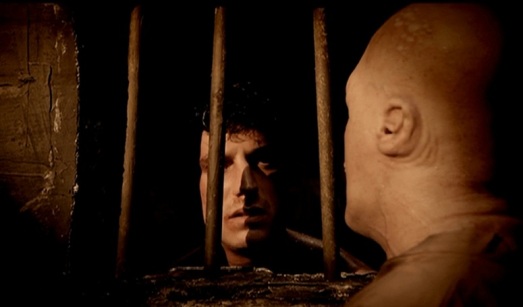 If only all dungeon prison cells had convenient adjoining windows, think how much shorter The Count of Monte Cristo would be…

There’s also a princess, descended of what line we do not know.  And there is a prophecy, generated from what and when, we also don’t know.  But none of that really seems to matter to the writer.

Is this the hero I see before me?  No?

The “protagonist” Magnus is not really the “hero”.  The hero seems to be either his brother or Draden, who we see for all of 45 seconds at the beginning before he’s executed.  Supposedly Draden passed on his soul/power/light/whatever to child Magnus, but adult Magnus seems to have done bupkis with it.  He’s not smart, he can’t fight, he’s got no magic–nothing.  And that’s even after the training montage.  Good grief.

So wait, is this guy the hero?

This is how little Magnus matters: he is not depicted anywhere on the DVD case.  Or on the face of the DVD.  Or even on the DVD menu.  Nowhere.  We’ve got Billy Zane photo-shopped into costumes and scenes in which he never appears.  We’ve got Draden fighting.  We’ve got the brother fighting (see above).  But no Magnus.  Perhaps that’s because he’s a whiney, un-appealing, Minnetonka-boot-wearing wimp.  Magnus even woos the princess with awful love poetry that he stole from his brother, which he recites to her while his brother is within earshot.  What the hell?

So what’s the big heroic mission that Magnus must complete?  Well, it’s a reverse King Arthur–that’s right, he’s supposed to shove a magic sword BACK INTO a stone.  Doing this causes King Laypach to disintegrate and his castle to turn into Cinderella’s dream house.  That seems to be it.

Uhh, Magnus, what are you doing?

So was this sword Draden’s sword?  Was it Laypach’s sword?  Does putting it into the stone seal some spell?  Am I over-thinking this?  Perhaps, but even for a cheapo movie like this it doesn’t cost money to write a better script (especially when the writer is also the director and producer).  Saying that the stone seals an evil spell would be such an easy fantasy cliché to stick in there.  Come on people!

Hey Magnus–you just killed King Leypach and saved Promethea, what are you going to do next?!

Along his way to Promethea (we think, it’s not exactly clear what or where Promethea is), Magnus encounters a disgraced former knight who becomes his berating mentor.  He encounters a magical priest-ish being who seems to be part ewok, part The Yellow Bastard from Sin City.  He meets two of the three Weird Sisters (the third was probably on a coffee break) and a blind old crone fortune-teller.  Finally, he meets the babe-princess love interest who, if either one of two “story-lines” is true, is actually his sister (?!?).  The babe-princess is guarded by a squad of  babe-warriors, many of whom die for sheer lack of even the most basic armor.  Apparently the Inverse Law of Fantasy Female Body Armor doesn’t apply here.

Just aim for the naked flesh.

According to IMDB.com the budget for this movie was around $2 million.  I’m guessing that most of it was spent on the one day of filming they were able to sign Billy Zane for, because it sure as heck wasn’t spent on costumes, props, sets, special effects, writing, editing, continuity, fight choreography, acting coaches, dialogue coaches, the horribly Photo-shopped DVD cover…

Maybe they had amazing catering?

The extras and minor characters seem to have been recruited from a local Renaissance Festival, and one run by people who obviously don’t care much for historical accuracy.  (It’s never made sense to me why Ren. Fest types go to all the effort and expense of making costumes, props, and buildings, only to have them be laughably inaccurate.  But hey, whatever makes you happy I suppose.)

The March of the Ren. Fest-ers

Meanwhile, costuming for the main characters came from the remnants bin of a Jo-Ann Fabrics.  The capes are safety-pinned pieces of fabric that still have fold creases.  The princess and her Amazonian guards wear strips of upholstery trimmings as headdresses.  Magnus has on a green mock-turtleneck that is worn, for some reason, backwards, and you can see where the tag is sown in below the collar.  The “elite soldiers” wear over-sized chrome thimble shaped helmets, gray sweaters (which I think are supposed to be chain mail) and rather fem-y gladiator sandals.  It’s all very pathetic.

Again, maybe I’m over-thinking all of this, but it wouldn’t take much effort or cash to upgrade this from embarrassing to passable.

But on to the best part of the whole thing: Billy Zane.  He plays Laypach–an evil king, though it’s not really clear why he’s evil.  He’s got a harem of scantily clad females hanging around his throne room, sure, and he’s got a quick temper, but he’s hardly Caligula.  Perhaps he instituted cruel and shortsighted economic policies that bankrupted the kingdom?

During his scenes, you get the feeling that there was a script but that he just decided to ad-lib whatever the hell he felt like.  A couple of his scenes are just his random asides to the scantily clad wenches.  It’s hysterical.  Zane is hamming-it-up big time.  If there was any actual scenery, he’d be chewing it.

Billy Zane’s career is kind of interesting: he played a main character in the second highest grossing (not adjusted for inflation) film of all time…and then he’s in something like this.  Can’t decide if that’s sad or awesome.  I wonder if he gets residuals from Titanic.

King Laypach and the ladies.

…All of that being said, I love this movie.  And the DVD case is truly a sight to behold.

The Bottom Line:  Managed to be both so much more and so much less than it promised.